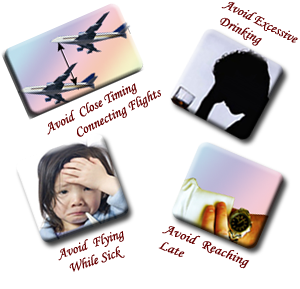 Business class airline travel was considered as a token of luxury and comfort compared to all other means of transport. However it has been seen lately that airline passengers’ satisfaction is plummeting following record delays and flight cancellations. There are other reasons like the expectations of the  business class passengers going beyond airline safety rules like the luggage is supposed to arrive intact at its destination. Many passengers feel that many horrible experiences more than just lost luggage ruin the airline travel in the whole. Even though the airlines are responsible for air travel safety, flying on airplanes involves passenger rules as well. Remember the following things and avoid them for betterbusiness class flights.

Avoid coming late:
Airlines recommend passengers to arrive 2 hours before the scheduled departure and there is a reason for that. Two hours is important since there would be heightened security, slow moving traffic near all major airports and also some unexpected course can interfere on your way. If you are running late, it would surely increase stress and doesn’t help you to start the travel on a positive note.

Avoid expecting too much amenities:
Some of the low cost carriers would not supply more than a blanket and some snacks. However as a part of cost cutting measures in the industry, many airlines have been offering only limited amenities on board. Hence it is better not to expect too much and come prepared with snacks, clothing and some lighter entertainment options. However business class and first class can expect more in terms of in flight amenities.

Avoid excessive drinking:
It is true that when you are nervous of flying, a drink or two can help you to relax. But make sure that you don’t over indulge. It would result in great embarrassment if you get drunk on the plane too much.  It would surely ruin the whole trip. Hence make it a point to dink in moderation. Moreover, if you are taking prescribed medicines, you must know that meds often don’t mix wel lwith alcohol.

Avoid flying sick:
It is not a pleasant thing to wake up sick on the morning of a long planned vacation. Loading up on pills and flying sick should never be the plan except it is an emergency. There are chances that the passengers and flight crew would fall sick since the air on planes is massively recycled. So the germs could be easily transmitted all over. It is highly advisable to reschedule your trip if you wake up sick on the traveling day.

How it Works
Our customers say:
Trustpilot